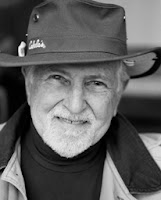 BPNW member Harry Rutstein was the first person to accurately follow the route of Marco Polo over land and sea from Venice, Italy to Beijing, China, making his own journeys from 1975 to 1985.

The author of In the Footsteps of Marco Polo: A 20th Century Odyssey, originally published by The Viking Press, Rutstein currently heads The Marco Polo Foundation, Inc. This non-profit foundation is dedicated to providing a better understanding between the East and the West by means of international research.

Rutstein worked with Bennett & Hastings in Seattle to publish The Marco Polo Odyssey in September 2008. An interview with Rutstein about his adventures was broadcast on February 9 on Sound Focus and can be heard at KUOW's website.

Extra: The February 9 Sound Focus broadcast also includes an interview with BPNW member Kunle Oguneye on the publication of his first book Sikulu and Harambe By the Zambezi River