Approximately 400 booksellers from 140 Northwest bookstores attended the Pacific Northwest Booksellers Association (PNBA) Trade Show in Bellevue, Washington. Among the many displays that the booksellers browsed were six tables of books from PMA, BPNW, and NWABP members. Many publishers also visited the display to learn how they could join PMA or the organization's Northwest affiliates.

Fifteen volunteers from Book Publishers Northwest (Seattle, WA) and Northwest Association of Book Publishers (Portland, OR) staffed the booth. It was a chance to meet old friends and make new ones. New BPNW member Michael Lalumiere (right) of Staggerlee Books came to the PNBA show to help at the PMA table and promote a new novel set at Crater Lake. 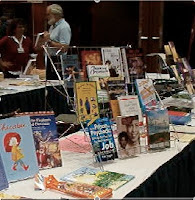 At the end of the show, the display books were donated to PNBA's Rural Library Drive, a charity that collects books for small rural libraries with little or no book-buying budget. The grateful librarians were impressed with the incredible variety of the titles that they received from the independent publishers.

The BPNW/PNWBP/PMA table was located in the middle of the room, abuzz with book, sideline, distributor, notecard, artwork, wholesaler, and author attendees.

I suggested BPNW publishers consider offering a "Job shadow" day to Tom Blaschko of Idyll Arbor publishing, and he shuddered. Publishing is still a mysterious business to me, an author/publisher whose single title, The Fisherman's Quilt, has been listed on Amazon as one of their "Self-published books that have gone on to glory." Hmmmmmmmm.

A highlight of the show was when Art Shotwell, an online bookseller from Anacortes, Michael Donnelly, author of young adult and "New Age Mystery" novels (is that right, Mike?), and Marian O'Brian of Boku Books and now my neighbor (whose products are now represented by George Carroll of Redsides), all gathered to talk at the BPNW table about our enterprises and the directions they've taken since we last met.

It was fun to introduce Judy Barnes Baker, author of Carb Wars to BPNW and PMA, and to meet J. Ruth Gendler, author of Notes on the Need for Beauty, published by Marlowe and Company, with the cover design by our mutual friend Marian O'Brian, (whom I first met at PNBA, sharing a table). I was a little envious of Ruth saying she'd sold 35,000 copies of her first book, and she told me of her experiences in working for a wealthy woman with lots of money to spend publicizing her book before Ruth's first book. It never ceases to entertain me, the different routes we take as we become involved with book publishing.

This was my first show since the death in June of Jan Nathan, and after reading the September issue of "Independent" the PMA magazine, I felt a twinge of sadness that we won't see her in person again, yet a touch of familiarity too, that I was cruising the scene that she helped me to make mine.

As I roamed the booths, with no particular system, the Clueless George books, by Pat Bagley, a takeoff on the Curious Georgebooks by the Reys, caught my eye. I asked the rep from White Horse Books, the publisher, if there were any copyright problems, and he said that Curious George publishers gave the author their blessing. The bright artwork of Grant Pecoff, as shown in children's books and notecards, reminded me of the clear bright colors of Hawaii, where he lives.

I had a long talk with a woman from Washington State University press about University presses, and learned that usually their choices are made by a board, and they usually don't publish fiction.

I picked up catalogs from Graphic Arts Center Publishing Company, which continues to publish books of beautiful graphic quality.

And finally, I picked up the backlist catalogs from Workman and Random House, because I want to see what books continue to sell, year after year.

It was a quick day, totally devoted to the show booths, but I learned a lot, connected with old friends, and made new ones.